Andie Bottrell is a multidisciplinary creative and the owner of Designing Indie. 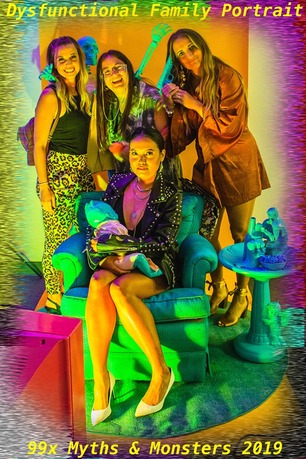 In Recent News:
Andie stars as Jen in the Springfield area premiere of Bekah Brunstetter's The Cake, presented by Springfield Contemporary Theatre at the Springfield Art Museum March 25-27, 31-April 3, 2022 - Evenings at 7:30pm, Sundays at 2:00pm.

Andie's artwork and photography were on display at the MudHouse in Springfield in March, 2020.

Andie returned to debut a new tableau at the Springfield Art Museum's 99x Myths & Monsters event in September, 2019. Photos from her Dysfunctional Family Portraits tableau are now open for viewing to the public here.

Andie's photography was on display at the Park Central Branch Library for the month of September, 2019.

Andie performed her music at #MeToo Springfield's 1 in 6 show on March 8that Q Enoteca featuring all female musicians, comics, poets, and artists.

The Springfield Newsleader did an article on women in comedy in Springfield, MO and featured Andie.

Andie returned to the Springfield Art Museum to create a living tableau for their 99x Cirque event September 2018. 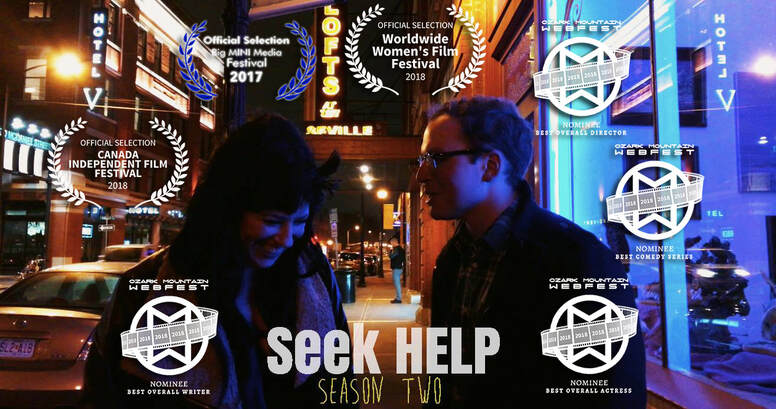 The TV Pilot "She's Just Making It Up" that Andie Co-Created and Co-Wrote is being filmed in Los Angeles in September 2018, with Andie attached to Assistant Direct, Produce, and act in. ​
Andie's webseries SEEK HELP (Season 2), which she wrote/directed/produced/stars in and edited screened, binge-style, at Moxie Cinema on April 30th! The whole season is now available online here <-
Peak this clip from Season Two below: 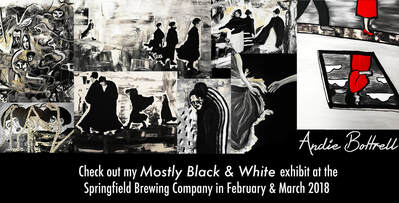 ​Andie played Jenny in the play The Christians at Springfield Contemporary Theatre MARCH 23-25, 30-APRIL 1, 6-8, 2018.
​
​Andie's Mostly Black & White exhibit at the Springfield Brewing Company was up all month in February & March 2018. 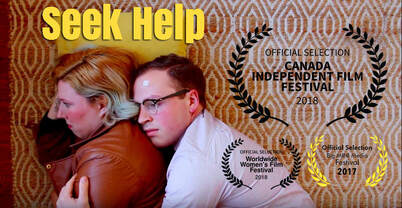 Andie's webseries SEEK HELP Season Two was successfully funded through Seed&Spark, while Season One has been making the festival rounds playing in New York, Canada, and Arizona!

​Andie joined a phenomenal ensemble in the run of GOOD PEOPLE at Springfield Contemporary Theatre September 8th through the 24th. 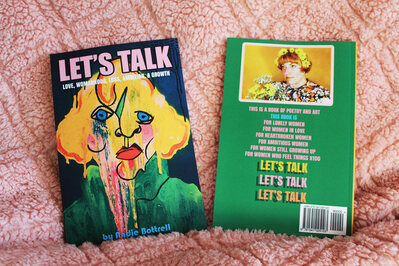 ​Andie's book of poetry and art LET'S TALK was published October 2017. Buy it on Amazon.com

Andie spoke on a panel for the Public Affairs Conference called "Should All Children Be Taught The Arts?" at MSU.

​Andie premiered a gallery show at Tea Bar & Bites in March 2017 featuring abstract and figurative spray paintings. It was called "Fun and kind of twisted."

Andie's artwork and styling were on display at the Springfield Art Museum for their 99x Bohemian Belle. 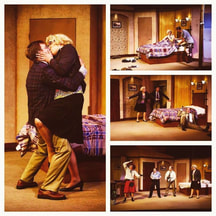 Andie was nominated for Best Actress in the Sato48 film Good Girl directed by Shannon Michelle and written by Ellen Simmonds. Watch on the Video page!
​

​ In May, Andie's first solo art show "The Break-Up Art Show" premiered at BookMarx for   First Friday Art-Walk, featuring nearly 100 new paintings, two books of hand written and   illustrated poetry, and an interactive "Heartbreak Journal" for patrons to share their own   tales of woe.

Andie acted in the feature film The Weight with Clayne Crawford. "The Weight is a noir thriller about a divorcee who's pulled into a small town crime ring when her ex-husband goes missing and the local sheriff refuses to help."

Andie wrote, directed, produced, starred and edited the webseries   LANDLOCKED about a couple in a long-distance relationship   struggling to stay connected despite facing many challenges both   technically and mentally. Watch the 10 episode Season now   at http://www.landlockedthewebseries.com/